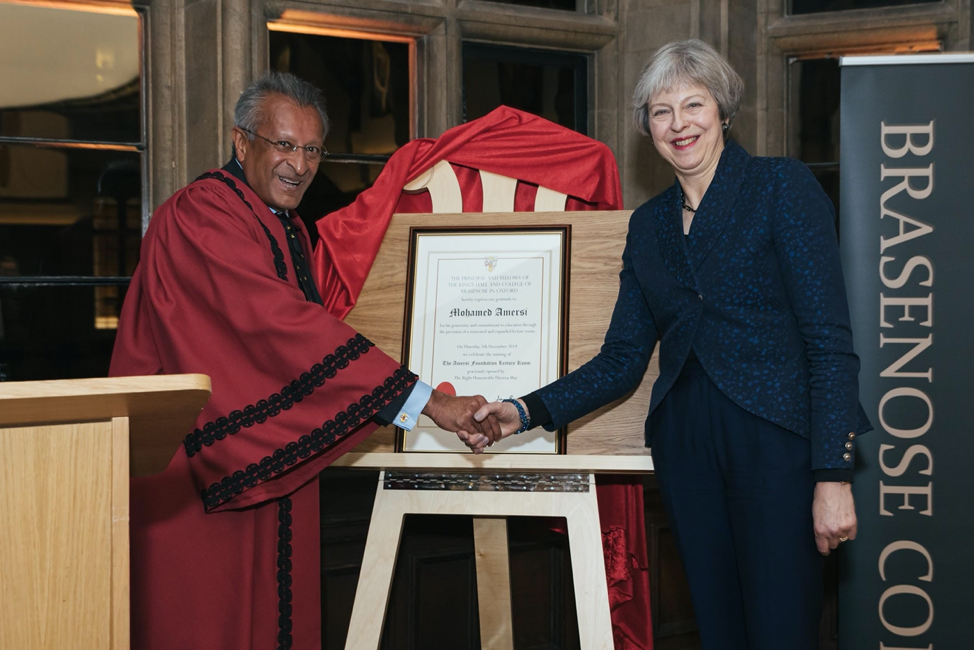 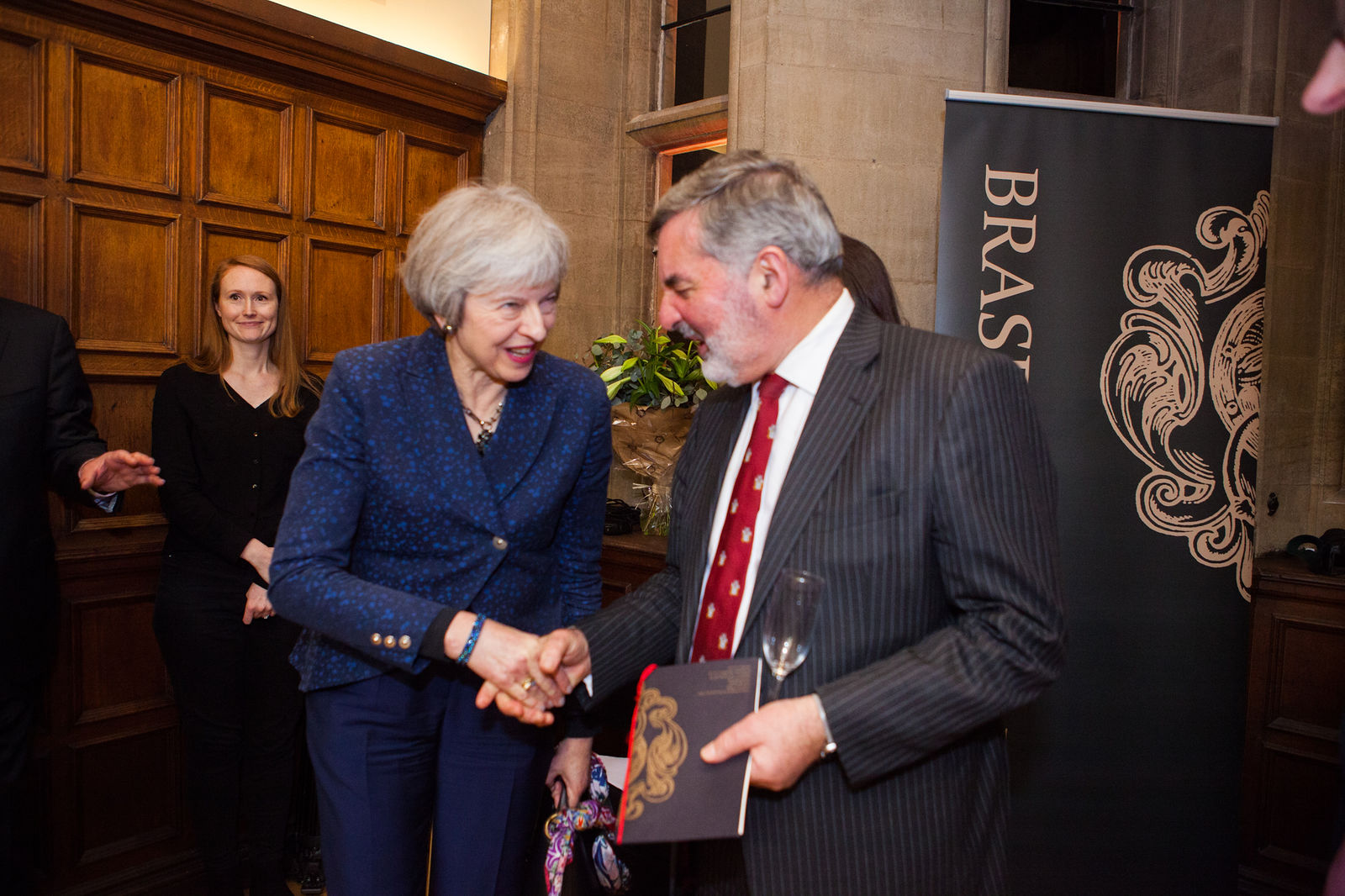 The Rt Hon Mrs Theresa May and John Alderice

The evening entailed a keynote opening speech from St Hugh’s alumna and former Prime Minister Theresa May, recognising Mohamed’s breadth and depth of philanthropic commitments and, in particular, their shared efforts in addressing modern slavery.

Theresa May was followed by John Bowers, the Principal of Brasenose College since October 2015. Bowers referenced Mohamed’s focus on ‘The Three E’s’ – education, engagement and empowerment, and their impact on the Brasenose community to educate and empower students, enabling them to engage in research into some of the world’s pressing questions.

In Mohamed’s speech, he described the illustrious history of Brasenose College, since its founding in 1509 by a bishop and a barrister. Mohamed highlighted stories of the College’s notable alumni (David Cameron, William Golding, and Jeffrey Archer to name a few), and its progressive leadership in 1974 as one of the first five all-male Oxford University colleges to admit women. On a personal note, Mohamed shared the dual role Brasenose has played in his own journey – both as “the perfect tutor… and the perfect cause”.

Mohamed continued to outline his vision and hopes for the Amersi Foundation Lecture Room and future generations of students. The Lecture Room symbolises the weaving of a tight-knit fabric, a result of the alignment of values between Mohamed himself and the ethos of Brasenose College.

Mohamed’s intention is for this dedicated space to serve as a catalyst to encourage the collective pursuit of knowledge and understanding, the realisation of human potential, and the spread of opportunity and ideas through collaboration and teamwork.

With the timing of the evening falling in the shadow of Brexit and the pending December Elections, Mohamed’s speech concluded with three timeless wishes for future generations of Brasenose students;

1 “Vision without action is a daydream and action without vision, a nightmare.”

To equip students with the skills and capabilities to both set and enact on their visions.

2 To “Study with your hearts, as well as your heads”.

When learning, to reflect on the political, cultural and human dimensions at play within situations. 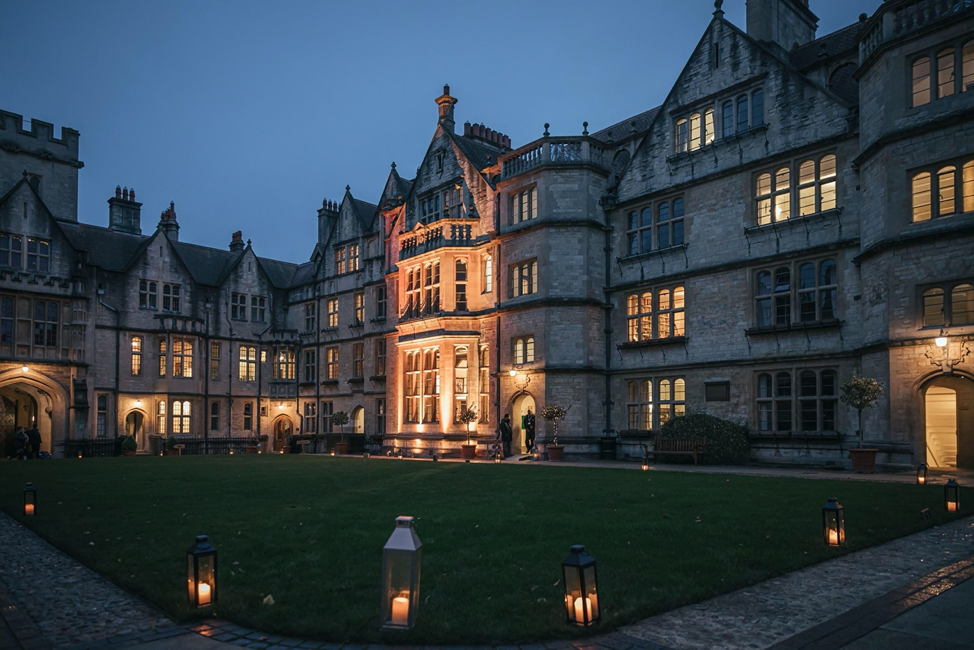 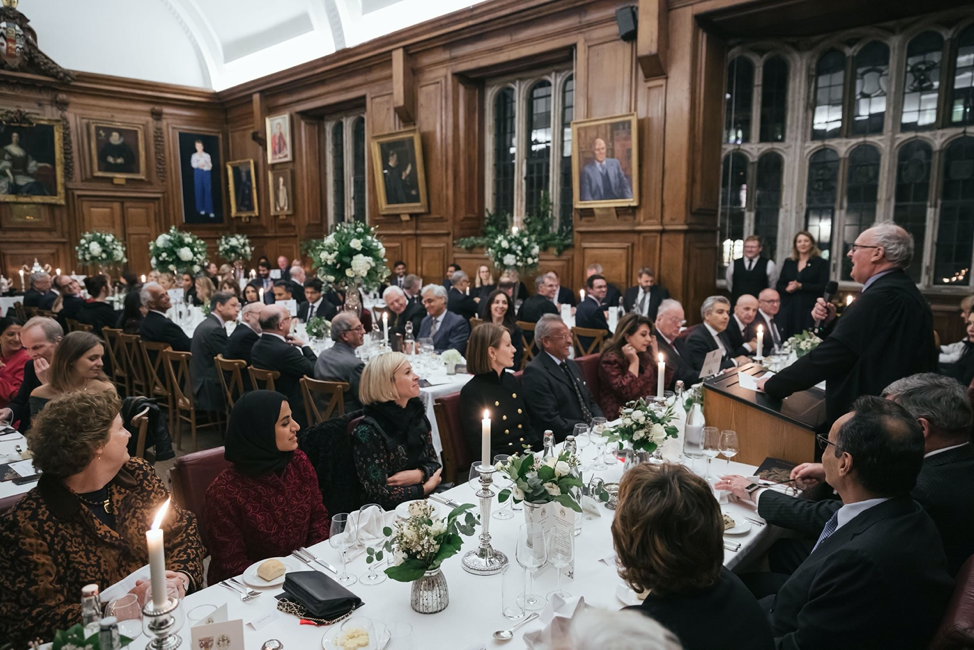 Read what Mohamed Amersi had to say in this speech

SAVE & ACCEPT
Go to Top